By Aakriti
She had come to this city where for every puff of pollution that the vehicles churned out there were trees to take in that dirt and purify it into fresh air. It was her second visit in this city, not to explore around, but more to find her self, in the process called growth.
From her busy schedule she took out some time to meet him. Neither of them had ever met before, sure they had an insight into the poet the other person carried within, and a bit of person as well, a glimpse they would get in feeble moments of ‘on-line-ity’  but beyond that existed this unknown space waiting to be known.
As she fixed her meeting with him, she told him if he could take her to some quiet place, a little away from the hullabaloo of the city.
And he took her there, a place where a million lights lit not only the outdoors making them serene and bright, but one where the liveliness of the other could shine in bright light! 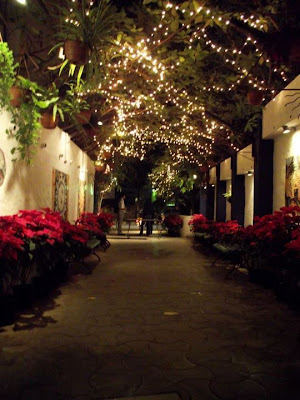 As they walked in, she marvelled at the lights and the simplicity and extravagance which they displayed at the same moment. She was speechless, for no words in her poetic heart could express what she felt at that moment. She looked at him and smiled her glittery smile, and with no words exchanged or spoken, he smiled back at her feeling the warmth and gratitude in her smile. 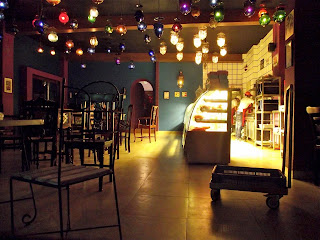 At the corner of this outdoor lay two nice black leather couches. She reached for one and made herself comfy just like a cat would jump onto one and snuggle herself in her soft fur. Her slippers lying on the rust coloured rug made her kolahpuris look like Cinderella’s glass sandals rested on a silk cushion.
In fact this sheer openness on her part made his usually ‘normal’ sitting posture look out of place. As they both sat on the couch facing each other, she with her legs folded sideways in a sitting position looked at him and said
“I cannot stop marvelling at this place you brought me to! I can stay here all night not knowing and not wanting to know when the night would end as another day would begin.”
With his one hand rested on his cheek, he looked at her with eyes worthy of respect and praise for he realized that she carried the poet in her heart.
“So what would you like to have Diya? Aren’t you hungry?”
She sighed, amazed at the beauty of this place and how fresh it made her feel even after a long tiring day.
“Alright, let’s order something” she said smilingly to him.
The ever flowing cool breeze of this city flowed like a musical note and her hair played with that breeze making her feel the chill. She wrapped the stole around her arms and said “Hot chocolate for me!”
He gave the order and came back.
“So Mr, Poet what’s up? Huh? How is life at your end?”
“I’m very well Madame, and I have to say you look great!”
“Oh, yeah? Say some more?”
“Well, I knew how you looked but I have to say you look ravishing in person!”
She beamed a hundred watt smile to him.
“Hmm” she hummed musically.
The space that existed between them got filled magically, as if these two people carried that aura that acted beyond the mere attraction. So even though these two individuals were chatter boxes, somehow today they just talked in their silence. Silence with hints of smiles, sparkly eyes, and dollops of warmth which both exuded towards the other.
As she sipped her hot chocolate, she looked at him lovingly and said
“Would you not like to do something to me?”
It took him few moments to register what she meant by “something”.
Then he replied in his sweet, calm voice “You seem so fragile to me that I would not wish to hurt you physically and when I see the beauty you carry in you, I weigh my words and choose them well, to protect your sanctity”.
These words of his felt like the music of an Irish flute to her. That which contained in its melody the liveliness as much as the poise and the tranquillity, offering oceans full of love, warmth and respect all in one moment.
She looked at him and then looked away, wondering if he did interpret that “something” wisely and then thought about what she spoke. But in that moment, she felt as if she was enchanted, for the words felt to have slipped without her conscious awareness. Wondering what he thought of her, she took her cup of hot chocolate and kept looking at it for few moments. Her eyes became restless as they tried to find that space where they could be brought at rest.
All through this he looked at her innocent expression which her face portrayed. As she laid her cup on the table again, he moved close to her and they both dived into the depths of the other’s eyes. He took her femininely carved thin hands into his and held them. He pressed her hands letting her know that he was neither there to judge her nor weigh every word she spoke.
She looked at him trying to hold her gaze, but then felt weak.
As she looked away trying her best to hide her feelings. He brought her hands to his lips and planted a soft kiss on them.
Stunned by his sweet gesture her heart skipped a beat and then it ached badly. As she looked at him, she had tears in her eyes, that which were waiting to fall. He then brought himself closer and hugged her and she like a kid nested her head onto his heart and the tears fell just where they were meant to be …………..safe and sound.

P.S: Credits for the above pictures: Twisha
©©©
©Aakriti

I don't know if it is fiction or true. But, I would like to believe that this is not just fiction as the way it is written, it seems you have lived every moment of it while writing it. Bangalore charm seems to be working on you...or should I say, that charm was always there...and it just came in a charming way of your writing this short story..!!